What is Khat?
The Addictive Herbal Stimulant

Some plants and herbs are widely used for their stimulant properties. Khat is one of them. While khat is not a totally unknown plant, it’s still a subject of many misconceptions. The main purpose of this post is to provide a deeper insight into khat, its effects, potential addicting potential, and more. Read on to learn everything you need to know about it.

Khat, or qat, is a stimulant plant native to cultures in the Horn of Africa and the Arabian Peninsula. You can recognize the Catha edulis plant by its green or green-brown leaves. Fresh leaves tend to look somewhat glossy, but as they dry, the leaves become leathery yellow or brownish. Khat resembles marijuana. The leaves of the plant are often bundled together and then wrapped in banana leaves.Over the years, the plant found its way to other parts of the world, including Southern Africa, Europe, the United States, Australia, New Zealand, Canada, and other countries.

The stimulant drug goes by several street names such as Abyssinian tea, African salad, chat, Catha, Miraa, Kat, and Quaadka. People use this drug in several ways, including chewing. The reason people typically chew fresh leaves is that the active ingredients in khat, cathine, and cathinone, are more potent that way, and they may break down quickly as leaves dry out.

As DEA explains, dried khat is used as a chewable paste or tea. It is also smoked or sprinkled on food.

What are the effects of khat?

Khat has a similar mechanism of action as other stimulants such as caffeine, cocaine, and even methamphetamine. Two active compounds, cathine, and cathinone are the main culprits for the effects of khat. In the brain, khat elevates the levels of dopamine. Dopamine is a neurotransmitter that makes you feel good. Khat also stimulates the release of norepinephrine which makes you more alert, even kind of hyper. The drug also acts on other parts of the body by increasing blood pressure and accelerating heart rate. Prolonged, especially heavy, use of khat can cause problems such as gum disease, tooth decay, heart problems, problems with the digestive tract, pain, and tumors.

Short-term effects of khat use include:

How long do the effects of khat last?

When consumed, the effects of khat peak in about 15 to 30 minutes, but they can last up to 90 minutes. The half-life of khat is three to four hours.

Why is khat illegal?

At this point, there is no such thing as a licit use of khat in the US. The plant is considered illegal because it contains two central nervous stimulants. Cathine is a schedule IV drug, while cathinone is a Schedule I drug.

Schedule IV refers to the drug with a low potential for abuse relative to those in Schedule III. On the other hand, Schedule I indicates a drug or substance with a high chance of being abused or causing addiction, and it has no FDA-approved medical use in the US.

Since khat contains psychoactive alkaloids with psychostimulant properties, it has addictive potential. Studies confirm the addictive potential of khat as well as possible psychiatric, psychological, and medical consequences associated with stimulant use. Unfortunately, current epidemiological studies do not investigate the prevalence of khat addiction, even in countries where the use of khat is considered “lifestyle.”

The substance is believed to create a type of physical addiction similar to that of caffeine. That said, it’s tricky to tell apart addiction and dependence due to a lack of criteria for diagnosis.

Heavy and frequent use of khat can result in symptoms such as mania, short psychotic episodes, and aggression.

Withdrawal from khat can be unpleasant, and the severity of withdrawal symptoms depends on the frequency of use and quantity of drug a person takes.

The most common Khat withdrawal symptoms include:

Khat vs. other organic stimulants

Khat looks similar to other organic stimulants such as kava and kratom. Unlike khat, whose half-life is three to four hours, kratom lasts longer. The half-life of kratom is about 24 hours. Kava also has a longer half-life of about nine hours.

While kava is not a controlled substance in the US, unlike in other parts of the world, kratom and khat are. All these plants exhibit their effects through different active compounds. Kava owes its effects to kavalactones, whereas kratom contains mitragynine and 7-α-hydroxymitragynine. As seen above, khat contains cathine and cathinone.

Khat addiction is a real problem but largely uninspected. Addiction can cause various problems and impair a person’s quality of life. For help with khat addiction, it’s necessary to contact a rehab center that treats patients with different kinds of addiction, including khat addiction. You can call us 24/7 by clicking the button below. We are here for you and Dr. B is an addiction expert with knowledge of how to treat a Khat addiction. 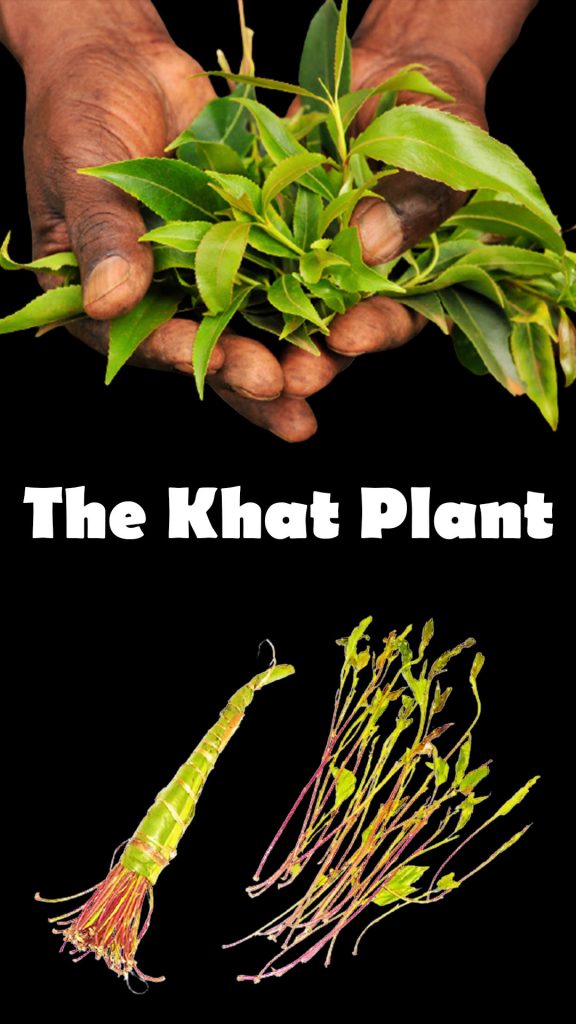